Home → Phaneroo → A Calling To The Nations

A Calling To The Nations

Jeremiah 1:5(KJV); Before I formed thee in the belly I knew thee; and before thou camest forth out of the womb I sanctified thee, and I ordained thee a prophet unto the nations. 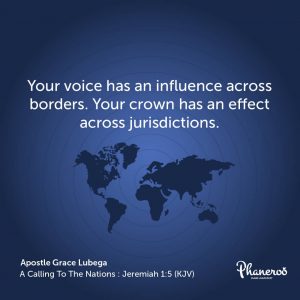 There is a difference between being an apostle in a nation and an apostle to the nations.

In our theme scripture, God tells Jeremiah that He had called him as a prophet to the nations. This means that Jeremiah was not just one among many within Israel. He was a voice to many other nations.

This is the distinction of the calling of God upon your life.

This distinction is the basis of what Paul calls the grace and apostleship, for obedience to the faith among all nations, for His name (Romans 1:5).

The prophet Isaiah understood this distinction and could boldly say, “Listen to me, O isles and coastlands, and hearken, you peoples from afar. The Lord has called me from the womb; from the body of my mother He has named my name.” (Isaiah 49:1).

Your voice has an influence across borders. Your crown has an effect across jurisdictions.

God could not have called you to the nations without equipping you with all that you need to sound across your country’s borders.

He has amplified your voice with wisdom, knowledge, power and grace.

Your voice has an influence across borders. Your crown has an effect across jurisdictions.

PRAYER: Loving Father, I thank you for this Word. Thank you because my voice is clear and my sound is distinctive. Nations hear me and bow to the name of my God. I influence thought and policy across the nations because I received the grace that causes nations to obey.
In Jesus’ name, Amen.