Home → Phaneroo → Beyond A Purged Conscience – 1

Beyond A Purged Conscience – 1

Hebrews 9:8-10(KJV); The Holy Ghost this signifying, that the way into the holiest of all was not yet made manifest, while as the first tabernacle was yet standing: Which was a figure for the time then present, in which were offered both gifts and sacrifices, that could not make him that did the service perfect, as pertaining to the conscience;
Which stood only in meats and drinks, and divers washings, and carnal ordinances, imposed on them until the time of reformation. 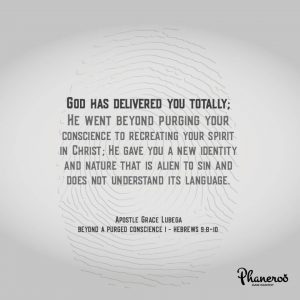 A purged conscience gives a man the comfort that his sins have been forgiven. However, it does not deliver the man from the dictates of the flesh and of his carnal or sensual pleasures.

A person with a purged conscience will have the blessed assurance of forgiveness but this will not stop them from doing what they want in their flesh until such a time as when their conscience is heavy and thus, they seek the presence of God again to be relieved from the burdens of guilt.

This is the Christian who comes to God and confesses his sins but does not repent in the true definition of repentance.

He will tell God, “I will never do this again… I promise this is the last time…”

That same person leaves the presence of God with the comfort of forgiveness but this is short-lived because he is not alive to the nature in Him that does not sin. It is inevitable that He will commit that sin again and again and again.

That is not the relationship that a New Testament believer has with God. God has delivered you totally; He went beyond purging your conscience to recreating your spirit in Christ; He gave you a new identity and nature that is alien to sin and does not understand it’s language.

As such, your liberty in Christ is not limited to the clearness of your conscience before God. It also manifests in every area of your life.

GOLDEN NUGGET:
God has delivered you totally; He went beyond purging your conscience to recreating your spirit in Christ; He gave you a new identity and nature that is alien to sin and does not understand it’s language.

PRAYER: Loving Father, I thank you for this Word. Thank you for the ministry of grace and mercy that has cast my sins as far as the East is from the West; that has erased my past and made all things new; that has made everything about me of God. I rejoice in this liberty and live my life in this consciousness.
In Jesus’ name, Amen.