2 Corinthians 3:3(KJV); Forasmuch as ye are manifestly declared to be the epistle of Christ ministered by us, written not with ink, but with the Spirit of the living God; not in tables of stone, but in fleshy tables of the heart. 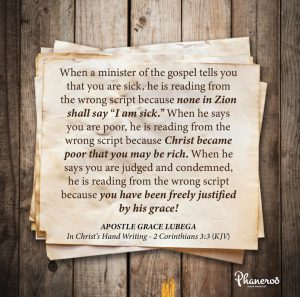 You are a written epistle.

The Message Bible version of our theme scripture says, “Your very lives are a letter that anyone can read by just looking at you. CHRIST HIMSELF WROTE IT — not with ink, but with God’s living Spirit; not chiseled into stone, but carved into human lives — and we publish it.”

The distinction on any true minister of the gospel is the wisdom to read a man’s life from the place and in the very print that Christ wrote it.

Some ministers read your life but from a different script. They speak lines that God did not place in your story.

When a minister of the gospel tells you that you are sick, he is reading from the wrong script.

PRAYER: My Lord I thank you for the story of my life, that which is not written by ink but by the Spirit and with your very own hand. I know who I am and read from the right script every day. I am blessed! I am healthy! I am anointed! I am rich! I am crowned with revelation! I am mantled by the wisdoms of eternity! I am shining with the glory of God! In Jesus’ name. Amen.