Hebrews 11:3(AMP); By faith we understand that the worlds [during the successive ages] were framed (fashioned, put in order, and equipped for their intended purpose) by the word of God, so that what we see was not made out of things which are visible. 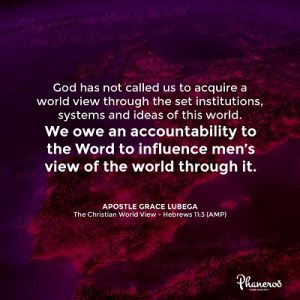 Christianity is not merely a set of beliefs, it is also a world view. Sadly, it is one of the weaknesses of the Christendom in failing to acknowledge it as such.

Christianity has for a long time existed in an ethos whose world view has been predominantly shaped by the men of this world.

A mythological world view caused men to create gods in their own image. As such, we see Greek and Roman gods having very human temperaments and therefore prone to human weaknesses.

The natural philosophers shaped human thought by their concern with the natural world and its processes.

Modern thought today is often influenced by humanism and a form of science that seeks to eliminate the existence of God.

But, our theme scripture reveals that the worlds, including the physical world in which we live was framed by the Word of God.

This means that the Word must inform our view of the world and thus we as Christians must be in a position to shape contemporary thought.

Consider these two examples; The forces that influence the economics of this world base their predictions on market factors, human behavioral patterns and various political players. But how does Jesus asking Peter to get money out of the mouth of a fish fit in this setting? (Matthew 17:27).

The world view on health and medicine. This is founded on the views of Hippocrates whose medical tradition sought to find natural explanations for sickness and health.

This definitely differs from the Christian thought that sickness is spiritual and consequently demonic (Acts 10:38).

When the Bible in our theme scripture says that what is seen/visible was created by what is unseen/invisible, it means that the reality of the spiritual world shows us the spiritual form of everything that is physical.

God has not called us to acquire a world view through the set institutions, systems and ideas of this world.

We owe an accountability to the Word to influence men’s view of the world through it. Hallelujah!

GOLDEN NUGGET:
God has not called us to acquire a world view through the set institutions, systems and ideas of this world. We owe an accountability to the Word to influence men’s view of the world through it.

PRAYER: Father I thank you for the gift of your Word. It shaped the world and created everything that I see. I choose to see the world through your Word, to pattern my thinking according to its dictates, to align my ideas and vision to its precepts and to influence my world through its commands. In Jesus’ name. Amen.