Home → Phaneroo → The Heritage Of His Servants – 3

The Heritage Of His Servants – 3 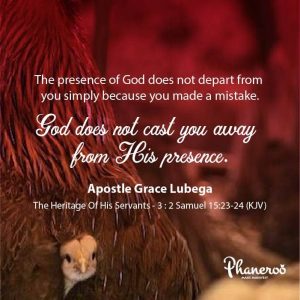 When King David fled from his son Absalom’s invading troops, the Bible reveals that the covenant box left with him.

The covenant box represented the presence of God.

However, despite all of David’s mistakes, despite the fact that at that point in time, he was deemed unworthy in the eyes of Israel, the covenant box went with him.

What does this mean to the Christian?

The presence of God does not depart from you simply because you made a mistake. God does not cast you away from His presence.

He says I will never leave you nor forsake you (Deuteronomy 31:6).

In Isaiah 49:15, He says that a mother may abandon a child that she bore but He will never forget you!

Some Christians leave church and abandon ministry because they think that the presence of God has departed from them because of their failures.

This is not so, child of God.
He is with you. He goes before you, is beside you and is in you.

His name be praised!

The presence of God does not depart from you simply because you made a mistake. God does not cast you away from His presence.

PRAYER: Father, I am grateful for this Word. I have been sealed with the Holy Spirit and the anointing abides with me forever. Your presence in my life shall never depart because this is your promise to me. I live life in the consciousness that you are ever-present. In Jesus’ name. Amen.