Home → Phaneroo → The Indifference Of Caiaphas

The Indifference Of Caiaphas

John 11:49-52 (KJV); And one of them, named Caiaphas, being the high priest that same year, said unto them, Ye know nothing at all, Nor consider that it is expedient for us, that one man should die for the people, and that the whole nation perish not. And this spake he not of himself: but being high priest that year, he prophesied that Jesus should die for that nation; And not for that nation only, but that also he should gather together in one the children of God that were scattered abroad. 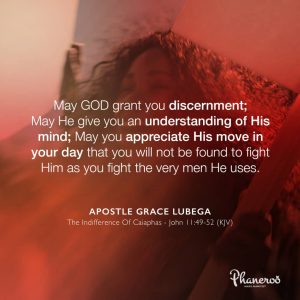 In our theme scripture, Caiaphas, by reason of the fact that he was the High Priest that year prophesied that Jesus was meant to die not only for the nation but also to gather together the children of God that were scattered abroad.

In the Book of Acts, we find an account of Caiaphas and his fellow council members seeking to kill the apostles because they were preaching about the Christ; the very person he prophesied about.

The scriptures reveal in Acts 5:16-18, 27-29; “There came also a multitude out of the cities round about unto Jerusalem, bringing sick folks, and them which were vexed with unclean spirits: and they were healed every one. Then the HIGH PRIEST rose up, and all they that were with him, (which is the sect of the Sadducees,) and were filled with indignation, And laid their hands on the apostles, and put them in the common prison…And when they had brought them, they set them before the council: and the high priest asked them, Saying, Did not we straitly command you that ye should not teach in this name? and, behold, ye have filled Jerusalem with your doctrine, and intend to bring this man’s blood upon us. Then Peter and the other apostles answered and said, We ought to obey God rather than men.”

The fact that GOD had worked through him to prophecy about the Christ did not mean that Caiaphas was in consonance with the mind and ministry of the Spirit.

He is a typical example of one who sits in a high prophetic, pastoral, apostolic or other spiritual office but does not have the mind of GOD or an understanding of divine purpose.

Caiphas was a man exalted enough to be a voice in Israel but indifference set him against divine purpose.

The “indifference of Caiaphas” is the reason why a man, in the name of fighting for GOD, instead fights GOD.

May GOD grant you discernment; May He give you an understanding of His mind; May you appreciate His move in your day that you will not be found to fight Him as you fight the very men He uses. Praise Him!

May GOD grant you discernment; May He give you an understanding of His mind; May you appreciate His move in your day that you will not be found to fight Him as you fight the very men He uses.

PRAYER: Father, I thank you for your Word. I am alive to your mind and the direction of divine purpose in my time. I understand the flow of the Spirit, what He is up to and how mightily he is moving in our day. I walk in perfect tune to his desires, to build and edify the brethren and never to fight your move in our day. In Jesus’ name. Amen.