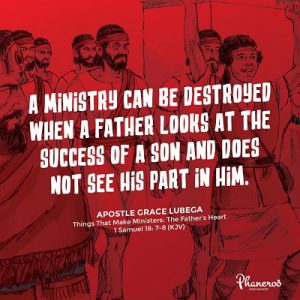 Saul turned against David and desired to kill him simply because David had “killed ten thousands” while Saul only killed “thousands.”

David assumed that he had a father in Saul but this was not so. Saul was provoked to jealousy because he did not carry a father’s heart toward David.

Take the example of biological fathers. If your child does something greater than you have done, it is natural for you to be proud because you see it as an extension of yourself doing better things.

It would be strange for you to fight your son–his success means that you have your part in him, unless he is not yours.

A ministry can be destroyed when a father looks at the success of a son and does not see his part in him.

GOLDEN NUGGET:
A  ministry can be destroyed when a father looks at the success of a son and does not see his part in him.

PRAYER: My Lord, I am most grateful for this wisdom. It teaches me to celebrate the success of others because those are things that prove ministers. I walk in love towards those that do great things in the kingdom and I never seek to fight or compete against them. I understand my part and lot in this gospel and with this wisdom I supply as each individual joint is mandated to. In Jesus’ name. Amen.