Home → Phaneroo → To Submit Your Gospel

To Submit Your Gospel

Galatians 2:2(KJV); And I went up by revelation, and communicated unto them that gospel which I preach among the Gentiles, but privately to them which were of reputation, lest by any means I should run, or had run, in vain. 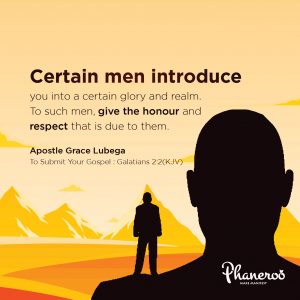 The gospel has principles under which it is preached.

One of these principles is that if a minister of the gospel should have precision in the things of the Spirit, he must have certain men that he relates with.

Take the example of the apostle Paul. Our theme scripture reveals that he submitted his gospel to men of reputation because he understood that failure to do so, he would run in vain.

These men of reputation were the apostles of the Lamb such as Peter and John.

These were men who had walked with the Christ and had an understanding of the price of the gospel.

Yes, Paul was deeply anointed. God had revealed to him countless mysteries in the gospel, but it was important for him to submit his gospel to these men at Jerusalem whom the Bible calls men of reputation.

These men of reputation were not necessarily men with the full revelation of the Christ but were men that held deep authority in the spiritual realm.

Beloved saint, certain men introduce you into a certain glory and realm. To such men, give the honour and respect that is due to them.

Certain men introduce you into a certain glory and realm. To such men, give the honour and respect that is due to them.

PRAYER: Loving Father, I thank you for this instruction in the pattern of the gospel. I thank you for the truths that you reveal to me every day. Thank you for the abundant grace of revelation and insight into your great counsel and mysteries. Even as I walk in the spirit of revealed truth, I live as a minister whose gospel and ministry is submitted to men of reputation. In this understanding, you cause me to reap where I have not sowed and to thrive in other men’s labours. To the glory of your name. Amen.