Home → Phaneroo → If Our Gospel Be Hid

If Our Gospel Be Hid

2 Corinthians 4:3-5 But if our gospel be hid, it is hid to them that are lost: In whom the god of this world hath blinded the minds of them which believe not, lest the light of the glorious gospel of Christ, who is the image of God, should shine unto them. For we preach not ourselves, but Christ Jesus the Lord; and ourselves your servants for Jesus’ sake. 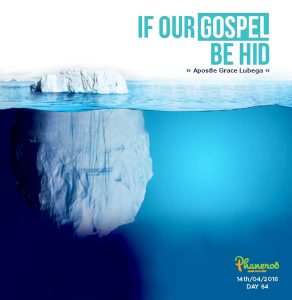 If Our Gospel Be Hid

I was meditating about this and it seemed so apparent how true it is, that if our Gospel be hid, it is hid from them that are lost. The truth is that our Gospel is hid from some people. The god of this world has blinded them that believe not. The blindness comes because they believe not lest the light of the glorious gospel of Christ should shine unto them.

Even though we preach, this Gospel is hid to many which are lost. Sadly I have realized that it is hid from men who profess the faith, they which say they are Christian and Born Again. There are things men call light but they are not light, they are darkness in their own selves but because they are unveiled to them some think that anything unveiled is light.

For example, when you look at the New and Old testaments you wonder, why did God choose 2 testaments only? Why not 3 or 4? Why old and new? Why not 1st and 2nd? Why do we have old and new? The word testament means covenant, it’s more of a will. When we go to the Old Testament dispensation, the men of old didn’t see what you and I are seeing. If you understand a testament as a will, you appreciate that the place of a covenant is a place where there is a requirement of the death of the testator. The Bible says in Hebrews 9:16; For where a testament [is], there must also of necessity be the death of the testator. The will of a man can only take effect if he is dead. There is no necessity to enforce a will when a man is still alive. So then I will ask you; what death necessitated the Old Testament?

The way God looked at the Old Testament was that he wanted to teach the church something. But before he teaches them what the real point is, he wants to first put a testament for them so that they have the appreciation of that life it is meant to show before he takes them into the life of Christ. So everything done and made by God in the Old Testament is just a picture to point men to the need of Christ. When Christ comes, he begins the New Testament. If Christ had come before the New Testament, they might not have appreciated it when he finally came in the New Testament. There is something God wanted to bring but he knew people would take it for granted or misunderstand because they didn’t know how important it was so he gave them the old that would point to how important the new is.

That is why the bible speaks of experiences where the scriptures see that God would justify the Gentiles by faith and so he goes and preaches the Gospel to Abraham saying in thee shall all nations be blessed. (Galatians 3:8) So when he preaches and Abraham understands it, Abraham is not dealing with the children of Israel by mistake. He deals with them as one who understands the original script. It is the same thing with Moses and all the prophets of old. Moses refused to be called the son of the daughter of Pharaoh esteeming Christ’s greater riches than the pleasure of sin because he had respect for the recompence. (Hebrews 11:24-26) But how can he esteem Christ if he has not seen him? That means that what Jesus does is; he goes to these Old Testament fellows, reveals himself to them and gives them the fine print of what he is up to. So, all of them are part and parcel of and contributing to this one end-that they will lead men to the position of need and appreciation of the life of Christ which was to come in the next dispensation.

As a new creature this is how you view the Old Testament; as something that reflects the real Christ. The bible calls it the shadow of things to come but the substance is of Christ. Jesus is the substance of that shadow cast in the law.

Of the Order of Things

I have realized that the church has run out of the true order of the spirit. When we walk out of the true order of the spirit, it does not matter how accurately and articulately our doctrine or sermons or discourses are laid before men, we will still minister disorder in the lives of people because if a man does not understand the order of events, the bible calls him a man which ministers questions in the hearts of hearers rather than Godly edification which is after faith. People go back with questions because every time you minister to them out of order it does not matter how articulate you are. You might minister something that just takes them out of order. We need to know the order of these things. What are the first principles of the oracles?

Therefore leaving the principles of the doctrine of Christ, let us go on unto perfection; not laying again the foundation of repentance from dead works, and of faith toward God.

That means if the church has to follow the first order, the first thing in the church is repentance from dead works. Dead works are the works of the law. If a man has not gone past that, he cannot go to the secondary things.

How much more shall the blood of Christ, who through the eternal Spirit offered himself without spot to God, purge your conscience from dead works to serve the living God?

Dead works are the things a man does to get to God, instead of embracing what God wants or has done in that man’s life. Firstly, when a man is Born Again, he should repent from dead works. For every born again, the moment you come to Jesus Christ, the fist difference you have to see is the law and the grace. Because the law was by Moses and has been existent but grace and truth came by Jesus. The bible says for the law is read in every city. Study many of these religions such as Islam; it’s all about the law. They have been there so long. So when a man shifts from the first principle of laying of the foundation of repentance from dead works, he moves to faith toward God. The works of faith come after the man has understood repentance from dead works. People who are so given to the teaching of the law and are under it do not see the miraculous like the people who walk in the grace of God because they have not yet broken through the foundation which is repentance from dead works and faith toward God. When a man understands the grace, the miraculous becomes a daily life experience.