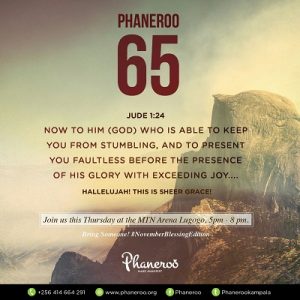 [Proverbs 27:17]; Iron sharpeneth iron; so a man sharpeneth the countenance of his friend.

Many men are caught up in meats, sacrifices and what they are doing every day to attain a God who is more eager to have them before they even fast. Unfortunately, they cannot yield. That is the place of pride. That pride is the very reason why we are not growing in the church of Christ today because a man would rather go to a prayer mountain to seek God for something he can get from another man’s hands. Iron sharpens iron. Why are you going to a prayer mountain when a man has what you need?

Some people ignore the power of words in changing the lives of men. In Job 16:5, he says; but I would strengthen you with my mouth, and the moving of my lips should asswage your grief.

These words we speak are not small; they are spirit and they are life. In romans 11:14, Paul says, If by any means I may provoke to emulation them which are my flesh, and might save some of them.

There is a place where God ministers to Paul in a particular way because he knows that if he draws certain imitations, he will save men, so he tells the church, ‘imitate me even as I imitate Christ.’ Timothy will be too stupid to refuse to imitate a man walking with God and go to a prayer mountain to get the very substance; that is pride.

Even Jesus who was God himself realized that if he did not take on the form of a man, he would not win the souls of men; even God needs a man; you do not need a man but God does.

God Needs Men for You

There are always leaders in every generation; people that God has set before us. Personally, when I meet a man who has what I want, I believe I have gotten it. All I need to do is keep the fig tree and be available for the master.

The subsequent verse of the reference scripture says; Whoso keepeth the fig tree shall eat the fruit thereof: so he that waiteth on his master shall be honoured [Proverbs 27:18].

I just need to wait on the master; serve him if I have to, do everything I must to get what he has because God needs men. I do not need them. Paul was anointed, do not be deceived- he was given the grace to lay the foundation of the gospel, but God paired him with Barnabas and Barnabas initially had the pre-eminence. Paul was still a baby in the spirit. He did not know the order of the spirit but he was still anointed.

In Acts 13:1-2, the scriptures say,  Now there were in the church that was at Antioch certain prophets and teachers; as Barnabas, and Simeon that was called Niger, and Lucius of Cyrene, and Manaen, which had been brought up with Herod the tetrarch, and Saul. As they ministered to the Lord, and fasted, the Holy Ghost said, Separate me Barnabas and Saul for the work whereunto I have called them.

According to the spirit, Paul was not yet even translated. He was still Saul. However, that is where many miss it because one has had experiences in Damascus, and in Arabia or has a certain anointing upon his life. To God, he is not yet converted. He is still Saul. The spirit does not say separate me Paul and Barnabas, he says separate me Barnabas and Paul. To God, Barnabas is still ahead of him.

There is a place in the scriptures where Saul transitions into Paul. It is not at his conversion. The proclamation that imputes the righteousness of that name could have taken place before but the real experience of Saul becoming Paul happened in a different place. Read the scriptures. It is after they had laid hands on him to separate him for the work. Saul cannot claim that he was given the grace to lay the foundation of the gospel and that when he was separated by God, nobody was present and so he did not need any man.

The bible says and David saw that Saul was come out to seek his life: and David was in the wilderness of Ziph in a wood. And Jonathan Saul’s son arose, and went to David into the wood, and strengthened his hand in God. And he said unto him, Fear not: for the hand of Saul my father shall not find thee; and thou shalt be king over Israel, and I shall be next unto thee; and that also Saul my father knoweth.

Do you know what is killing Uganda? We are orphaned. We have people they call fathers but they are just called that; they are only fathers in name.

The Bible in Galatians 6:1 says, Brethren, if a man be overtaken in a fault, ye who are spiritual restore such a one in the spirit of meekness, considering thyself, lest thou also be tempted.

Does it say criticize, talk about them on radio or go to every church warning others about them? No, it says restore.

Ask the young men in this nation who are criticized for preaching a wrong gospel; whether any father has ever reached out to them. Do you think they do not want to be fathered? They want to. Some people think that fathering is about having lived a long life or growing old and having grey hair.  Even the boys that have been raised do not know how to be fathers because they were not fathered; they ran out as prodigals.  They first have to break off from their senior pastors and leave with a rebellious spirit and start their own ministries. They want to reap what they did not sow.

Read church history; read about every general that was not accountable; none finished well; you will not be the first one. You claim to be submitted to the Holy Spirit, okay, but God needs certain people for you.

Look at Elisha. He wanted something from Elijah. Elijah told him, ‘if you see me go.’ He did not tell him to fast for forty days. He only said, ‘if you see me go.’ For the same reason, God could not speak to Samuel with a voice that was different from that of Eli even though the man was fallen. He had to speak like Eli.

It is pride to refuse a sharpening. I used to ask God, ‘why do some men resist it?’ I realized that some men are not iron. They are honing stones; some of them can sharpen but they are not sharp.  Some cannot be sharpened because every time iron gets on them, iron appears to be cutting them because they are wood!