Home → Phaneroo → The Way of the Lord

The Way of the Lord 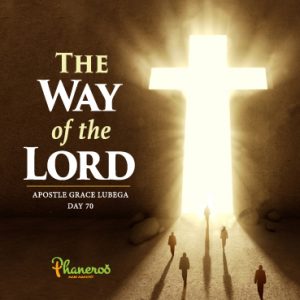 A Love that Surpasses Knowledge

When God is talking about his relationship with you, he is talking of a love that passes all knowledge. God wants to relate with you at a level that is deeper than anything that a man can ever define as knowledge. There is a place above knowledge.

One time, I was carried in the spirit and was taken to a place of what men call knowledge by reason of what a man adopts either through reading or listening or any other way and I saw that there was an end to it. When the Bible speaks of knowledge puffing up, you ask yourself; ‘how can a man be puffed up in what has an end? I saw the end of knowledge and to the end of that knowledge, I saw the life of heavenly creatures which lived the life of in-Christ beings verses the heavenly creatures who never had an experience of the in-Christ.

Look at the angels for example. God has never dwelt in an angel and so no angel understands God. Even Peter says it. He speaks of which salvation the prophets have enquired and searched diligently, who prophesied of the grace that should come unto you: Searching what, or what manner of time the Spirit of Christ which was in them did signify, when it testified beforehand the sufferings of Christ, and the glory that should follow. Unto whom it was revealed, that not unto themselves, but unto us they did minister the things, which are now reported unto you by them that have preached the gospel unto you with the Holy Ghost sent down from heaven; which things the angels desire to look into[1 Peter 1:10-12].

Even angels have a hunger to look into certain things. These things are not in heaven. They are in a human spirit in whom God dwells. Angels want to understand how God gets into a small man and starts to work. What is salvation? What is grace? Angels do not understand grace; they do not understand salvation; they inquire; they are like students learning every day. Some people think that because the angels worship God every day, then these angels understand God. The Bible says that they are ministers to the heirs of salvation. There is something in you that they need. That is why you cannot die when you know; the Bible says you are preserved by knowledge; you cannot die when you know too much. The eyes of the lord preserve knowledge. People usually die because they do not know. You have to get to a place where it will take too much to get you off the earth because of what you know unless it is your time to leave and depart home. I refuse that you die early.

The angels do not know so they come to search out inorder to know what is in that kind of man. Even the prophets which prophesied did not understand what is in you. The bible then says, eye has not seen, ear has not heard what the Lord has prepared for us. If you have heard of Reinhard Bonnke or Benny Hinn or Deo Balabyekkubo, we are talking about something that you have never heard done by any of those men. A human heart cannot apprehend what the lord has prepared for you.

The Way of the Lord

[1 Corinthians 2:9 AMP] says; Things which the eye has not seen and the ear has not heard, And which have not entered the heart of man, All that God has prepared for those who love Him [who hold Him in affectionate reverence, who obey Him, and who gratefully recognize the benefits that He has bestowed].

The Bible says that God has kept these things ready for them who love him, not for them he loves. The quickest way to the deepest dimensions of God is though the lines of love. That is why he says that Christ may dwell in your hearts by faith; that ye, being rooted and grounded in love, May be able to comprehend with all saints what is the breadth, and length, and depth, and height; And to know the love of Christ, which passes knowledge, that ye might be filled with all the fullness of God.

When I went to the end of knowledge, I saw this thing called the love of the father. I realized that his primary interest was for me to understand myself in who he is; to know how I fit into him. When you are in that dimension, knowledge is lower; truth is the standard.  Truth is whether you know it or not. You can adopt by the knowledge that comes to you to know truth but there is a place where even if you did not know, you are; that is why he called it the perfection of love. He says and he says herein is our love made perfect, that we may have boldness in the day of judgment: because as he is, so are we in this world.

When I saw this love, I understood the way of the lord. I knew ways but I did not know the way. The love of God is his way. I found myself weeping bitterly but the tears I carried in my soul were for the end of what I thought could not end. When I saw knowledge fading away before my very eyes, I wept because the spirit of revelation was the very substance of God’s redemptive power. When a man sees redemptive power fade, he weeps. Hardly had I known that he needed to show us that beyond that, there is a place where a man needs not redemption. If that man is perfectly in love, he becomes as I AM; the Christ does not need redemption.