Home → Phaneroo → It Is Finished

[John 19:30]; When Jesus therefore had received the vinegar, he said, It is finished: and he bowed his head, and gave up the ghost. 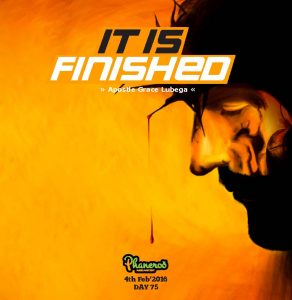 Many people think they understand why Jesus came but they actually do not. If you ask many Christians why they think Jesus came, many will tell you what they think brought Jesus or what they assume Jesus came for and some will give answers which are true but are only part of his mandate. For example, Jesus came to save the lost. That is true but there were men who went to heaven before Jesus ever existed in the flesh. Jesus came to wash away our sins. It is true but there are men who did not sin or who walked this life blameless such as babies. What then is the truth from his lips? He says, the thief cometh not, but for to steal, and to kill, and to destroy: I am come that they might have life, and that they might have it more abundantly [John 10:10].

The Lord Jesus came that you might have life. His mandate was to work out the plan and process to make sure that that is possible. When he did that, he said it is finished. You are not believing God to have a good life. Everything that pertains to life and godliness has been fixed.

What is finished? The fact that you have life abundantly, to the fullness, till it overflows. Many Christians walk in the unfinished work but they live as though they are walking in the finished work of Christ.

What You Need Is Seed

[Genesis 15:1-3]; After these things the word of the Lord came unto Abram in a vision, saying, Fear not, Abram: I am thy shield, and thy exceeding great reward.  And Abram said, Lord God, what wilt thou give me, seeing I go childless, and the steward of my house is this Eliezer of Damascus? And Abram said, Behold, to me thou hast given no seed: and, lo, one born in my house is mine heir.

Seed and child look like they are the same but they are not. Listen to a man’s problem; he realizes that he has no child and that his problem is that he does not have a seed. His problem is not a child but a seed. Another Christian’s problem is a child.

Through faith also Sara herself received strength to conceive seed, and was delivered of a child when she was past age, because she judged him faithful who had promised.

This means that with God, conception is about the seed, and if it occurs, then a child will be delivered. Through faith, Sarah received dunamis, that is the anointing to conceive seed. When she conceived seed, she was delivered of a child when she was past age. Without seed, Sarah could not deliver a child. Seed was the primary place of conception. Luke 8:11 says, now the parable is this; that the seed is the word.

Your problem is not what you think is the problem. You might feel like you are stuck in a certain box and cannot move. Your problem is not that box; your problem is that you need seed. The Bible says that he giveth seed to the sower. When seed comes to the sower, the sower gets bread and he eats. You cannot eat before the seed. It has to be sown. I am not talking about money but about the word.

What is the Seed?

Now to Abraham and his seed were the promises made. He saith not, And to seeds, as of many; but as of one, And to thy seed, which is Christ.

What is the seed? The Bible says that God promised Abraham. He spoke of seed and not seeds to mean many but one seed which is Christ. God did not promise anybody outside that equation. He promised Abraham and his seed.

Brothers and sisters, I speak in terms of human relations: even though a last will and testament is just a human covenant, yet when it has been signed and made legally binding, no one sets it aside or adds to it [modifying it in some way].

When a natural man makes a covenant/ testament or writes a will, it is usually final, what about God? When he says that I have blessed Abraham and his seed Jesus, that is it- It is final.

The Law is Late

This is what I mean: the Law, which came into existence four hundred and thirty years later [after the covenant concerning the coming Messiah], does not and cannot invalidate the covenant previously established by God, so as to abolish the promise.

The law came 430 years later. Let us do the math. In Genesis, the Bible says that Ishmael represents bondage because he symbolises them which are of Sinai. When Abraham was 86 years old, he produced Ishmael, but God did not agree with it. God came back when he was 99 years old and told him that the real thing was coming which was Isaac. What is 99 minus 86? It is 13. The number 13 is the number of promise that was representing the fulfillment of the true promise that God made to Abraham. This was the true promise which was of God and orchestrated by Him without any human effort to fulfill it. Jesus ultimately becomes the figure and representation of the fulfilment of the promise because he becomes the promise. How long does Jesus live in the world? For 33 years. What is 33x 13?  It is 429. 429 years later, the covenant was sealed and thus he said, ‘it is finished.’ When Jesus said it is finished, now the law could come.

It means that the law is too late to stop you. So, when they say that by the law, no flesh shall be justified, that scripture is too late for the Christian because God sealed your story before the law. There is nothing in the law that can hold back the covenant that he made through Christ. There is nothing that you can do to take away the blessing upon you. Does that mean I am telling you to do anything? No, to the pure, all things are pure but to the unbelieving and defiled, everything is impure.

He said it is finished when it clocked 429 years.  He said it is done.  Now that the law came later, it can’t change what God established. It cannot make void and disannul the promise. He did not say promises, he said promise. Which promise? The one that he made to Abraham and Jesus. This was the mystery which was heed from the ages past; the man God promised (Jesus) in you, the hope of glory. How can you not conceive? How can the law refuse you to conceive? It cannot because it is too late to refuse you.  There is no law in this world that can stand in the way of your blessing; not even gravity. No man in this world can stand in the way of your blessing and no man can frustrate your blessing. Amen!