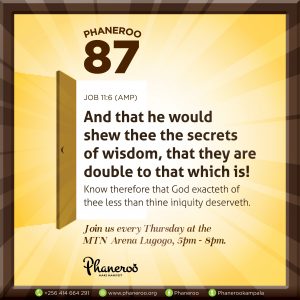 The wisdom of the Prudent

The bible says that the wisdom of the prudent man is to know the way of the Lord. (Proverbs 14:8) the reason why it is important to know the way of God is because you can explain his ways. If you only understand his ways it’s possible not to understand his way of doing things. You cannot interpret God by his ways, you can only interpret Him by his way and then His way starts to reveal His ways.

The Bible says that there was a time when the Holy of Holies was not revealed, even though there is a physical representation of the holy of holies there is a revelation of being in the holiest place in God. It’s a revelation. That’s why the bible says in Hebrews 9:6-8; Now when these things were thus ordained, the priests went always into the first tabernacle, accomplishing the service [of God]. But into the second [went] the high priest alone once every year, not without blood, which he offered for himself, and [for] the errors of the people: The Holy Ghost this signifying, that the way into the holiest of all was not yet made manifest, while as the first tabernacle was yet standing: (in other words when the 1st tabernacle was standing the holiest of all was not revealed. It had to be manifested, it had to be revealed. The holiest place in God is a revelation. It’s an existence that is not straightforward for every naked eye to see otherwise all Christians would see God, hear God and experience Him equally but to many it’s not yet revealed.

God is a God of seasons and times. You can understand your season but if you don’t know your time you cannot get results in your season. That is the problem of the man who spends 38 years at the pool of Bethesda (John 5:5-8). The season of the angel stirring water was known but every time he wanted to get in the bible says another man got in before because when the season came another man calculated time quicker than this fellow. Many are at that pool spiritually but cannot get in because other men know how to take occasion and opportunity of time.

The greatest asset in this life is time, it’s not resources but rather having the opportunity to cease time. The scriptures have taught us that there is a possibility to redeem time. Ephesians 5:16; Redeeming the time, because the days are evil.(KJV)It is possible to redeem time, it’s possible to do something in one year which could have taken 10 years  and it’s possible to do something in 10 years which you could have done in one year.

The difference between the most blessed and the most disadvantaged men on this earth is how time worked in their favor. In other words they earned quicker what takes other men more years to earn.

Hebrews 9:9-10; Which [was] a figure for the time then present, in which were offered both gifts and sacrifices, that could not make him that did the service perfect, as pertaining to the conscience; [Which stood] only in meats and drinks, and divers washings, and carnal ordinances, imposed [on them] until the time of reformation. So when the time of reformation came, everything changed. In this instance what is reformation?