[2 Peter 1:12]; Wherefore I will not be negligent to put you always in remembrance of these things, though ye know them, and be established in the present truth. 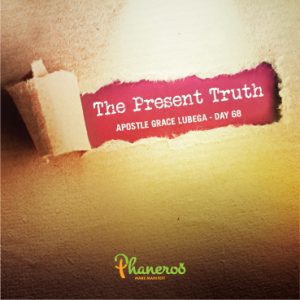 The Truth that is Above

When Peter says that there is a present truth, it means that there is a truth that is present. There are things in the Scriptures that despite there being there, some of their contexts are out of time for the New Creature.  That is why if you study the Greek word for present, it is translated to mean above, the truth that is above.

The truth is absolute. It is not relative. We are not at a place where we are claiming that your truth is not my truth. Whether you have your truth and I have my own, there is only one truth and that is Jesus Christ. But, the truth has dimensions of depth. There are certain truths that are above others and whatever is above is present.

Now, you might think that I am disqualifying whatever is lower, but no, the Bible says that all scripture is profitable. Yes indeed all scripture is profitable but there is such a thing as that which is present or that which is above. There are things that were true and applicable to the men of old in the Scriptures but are no longer applicable to the Christian. However, some people have a false humility that causes them to incline to things that make them become more indifferent in the things of God because they lack knowledge.

Of The Lawful Use of the Law

One time, a man berated me, saying, ‘how can you claim not to be under the law?’  I told him that the Bible says that we know that the law is good if it is used lawfully [1 Timothy 1:8]. If a man has not understood the laws that govern the use of the law, he cannot teach the law.  It means that there is an unlawful use of the law. If you are not established in the truth of Christ, you will unlawfully use the law.

1 Timothy 1:9-10 says; Knowing this, that the law is not made for a righteous man, but for the lawless and disobedient, for the ungodly and for sinners, for unholy and profane, for murderers of fathers and murderers of mothers, for manslayers, For whoremongers, for them that defile themselves with mankind, for menstealers, for liars, for perjured persons, and if there be any other thing that is contrary to sound doctrine.

Why do they put traffic lights at Jinja Road junction? It is because they know that if they do not put them there, men are going to drive differently. Why would a man drive differently?  It is because he is led by another thing. But God says, for as many as are led by the spirit of God, they are the sons of God. The moment you reach the traffic lights, the spirit will tell you to stop. You do not need a light. You are the light.

Do you know why they put all these laws, it is because they do not trust men. However, love believes all things and God is love. Since God is love, he trusts you; the heavens trust you; he knows that when you get to a particular corner, you will know what to do.

Of the Righteousness by Faith

When Paul is speaking about righteousness in Romans 3:21-22, he says, But now the righteousness of God has been clearly revealed [independently and completely] apart from the Law, though it is [actually] confirmed by the Law and the [words and writings of the] Prophets. This righteousness of God comes through faith in Jesus Christ for all those [Jew or Gentile] who believe [and trust in Him and acknowledge Him as God’s Son].

One time I told people that Moses was not legal.  He was a man God worked with to show people what the law was and what Jesus was. Moses was on Jesus’ side.  Paul in quoting Moses in Deuteronomy says in Romans 10:6, But the righteousness which is of faith speaketh on this wise, Say not in thine heart, Who shall ascend into heaven? (that is, to bring Christ down from above:)

When Moses speaks of righteousness, they think that he is talking of a righteousness by the law, but we understand from Paul that if you want to know the righteousness which is of faith, read Moses.  That is why when the Christ appears to them, the Bible says that he expounds about himself from Moses. He literally points to himself in Moses saying, ‘this is me in the law’ such that men understand that Moses was used to give the law but he himself knew the grace of God.

The ‘it’ in Deuteronomy was the Christ, but he expects that a man who understands the present truth can go in Deuteronomy and dig out this and understand that he spoke concerning Christ. Now he is saying that there is a righteousness that is independent of the law and detached from the law but Moses also attests to it.

Someone said, ‘doesn’t that imply that men should continue sinning because of the grace?’ I told the man of God that that is his problem. I did not continue sinning because the Bible is clear- to the pure, all things are pure. Don’t you know that the Bible says that he who is forgiven much loves much? Did the Bible tell you that they sin more? Don’t you realize that people do not walk in true love and righteousness because they are not convinced of God’s love and forgiveness? For everything that happens in their life, they assume that it has to do with the fact that they sinned.

We know that the law was not made for a righteous man. That is why Paul says, for you are not under the law but under grace. Some people say that you have to balance, no, you cannot balance grace and law.