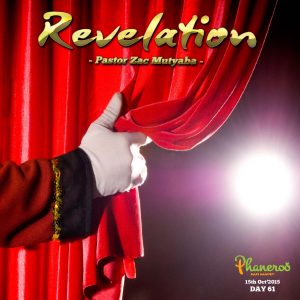 [Romans 1:1-5]; Paul, a servant of Jesus Christ, called to be an apostle, separated unto the gospel of God,(Which he had promised afore by his prophets in the holy scriptures,) Concerning his Son Jesus Christ our Lord, which was made of the seed of David according to the flesh; And declared to be the Son of God with power, according to the spirit of holiness, by the resurrection from the dead:  By whom we have received grace and apostleship, for obedience to the faith among all nations, for his name:

Of the Grace Received

I want to describe the kind of grace that you have. The grace message is the oldest message but there has been a total delusion in the body of Christ pertaining the grace.

When you talk about grace, we are talking about a life that starts from the spirit of holiness. When you say you are born again, you cannot talk about ‘sinner’ in the same context.

When he speaks of Jesus Christ by whom you have received grace, understand that you are not about to receive grace but rather that you have already received it. This grace is the divine influence of God in the human spirit, meaning that everything that you are is of God. This grace that you received was for the purpose of bringing all nations to obedience.

Many people claim that we ought to be careful where this grace is concerned, that we ought to maintain some kind of balance. What are you balancing? Instead of bringing nations to the obedience of Christ, some people are trying to balance the grace. I realized then that the grace of God is a revelation. Even Paul says this; that the gospel he preached was not taught to him by man but that it was revealed to him by the Holy Ghost [Galatians 1:11-12]. Until Christ is revealed to you, you cannot walk in this grace.

The problem we have is that most men want to understand the grace of God mentally. When the bible says that Noah found grace in the eyes of God, a Christian who perceives these mentally will think that Noah was having a walk and then stumbled on grace. No. That is not it. The scriptures say that he found grace in the eyes of the lord. It means that the Lord looked at Noah and saw grace. Grace was God’s vision of Noah. It was not about Noah looking for God but rather Noah was God’s vision. Noah was a revelation of God.

Today, we find people seeking for a God who seems to be hiding yet they are the very revelation of God. The Bible says that his eyes are on the righteous. You are God’s vision.

The Redemptive Power of Revelation

[Proverbs 19:18]; where there is no vision, the people perish: but he that keepeth the law, happy is he.

The Bible says that where there is no vision, the people perish. People are actually failing because they do not have vision. Another version says that men cast off restraint. It means that when the Christ is revealed, you do not tell a man to move here or there.

How is revelation redemptive? Romans 3:24; Being justified freely by his grace through the redemption that is in Christ Jesus.

This redemption is in Christ Jesus. What is redemption? The Greek word used therein points to the release effected by the payment of a ransom. It means that there is a release as regards one’s life because a ransom was paid.

When you are in Christ, you are free, you are released and you are delivered. There is release and redemption, because one man died. It means that it is no longer legal for a man to be sick in this dispensation.

The Place of Humility

The Lord told me that the only thing required in our time is that this Christ ought to be revealed.

The Bible says that Jesus found it not robbery to be equal with God [Philippians 2:6]. The true place of humility is knowing that you are God in the flesh. Pride is when men look like men. Humility is when men carry the true picture of God.

God has promised that he can become real to you. He is no longer a mystery. The true revelation of Christ is when a man realizes that he and God are inseparable, God’s experience is his experience, God’s life is his life, and God’s heartbeat is his heart beat. At that place, the word of God becomes a personal thing. That is why when he speaks of Mary, he says that what she had received could never be taken away from her.