Home → Phaneroo → The Wisdom From Above

The Wisdom From Above 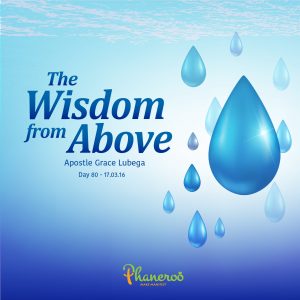 The Bible says in James 3:17 AMP; But the wisdom from above is first pure [morally and spiritually undefiled], then peace-loving [courteous, considerate], gentle, reasonable [and willing to listen], full of compassion and good fruits. It is unwavering, without [self-righteous] hypocrisy [and self-serving guile].
This wisdom from above is pure. There is a necessity for people to listen to something and it ministers the purity of the spirit; unadulterated. It is life when they receive it. People do not want to feel like what is shared has a certain defilement to it.

Because we have employed in our spirits the wisdom which is of this world, everything that comes as the wisdom of God is too hard for us to interpret because it is not revelation. It is a counter attack. Somebody considers it a threat when truth is spoken. Back in the day, when people heard the truth, they would get on their knees and repent and ask God to help them. Today when the truth is spoken, a man realizes that his ministry is coming to an end. Take for example the preaching of the grace of God to someone who has built a school on the law, a home on the law, educated his children on the law and gone live on radio and television on the law. When you start to preach grace, he will know that the teaching is breaking his ministry. However, God did not call us to build our own ministries. He does the building. He said, ‘on this rock I will build my church.’ When a church is built by men, it will go down. When a church is built by Christ, it is established on a foundation, a solid rock.

We want to raise a generation where a man can say, ‘okay, I might not have a job, true, but I want God.’ A certain musician sung a song and said, ‘I know you want something from God but I advise you to seek him. You will get those things’. The Lord told me that is not the right way because it means that a man is going to go to God to seek him such that he gets those things. It means that there is a certain lust. They ask and receive not because they want to consume it upon their own lust, the Bible says.

If you have not had the fullest revelation of what is free, you can never really start to seek God because the true beginning of seeking God is the revelation of the things that are free.