[Phaneroo 41]
[Psalms 74:9];  We see not our signs: there is no more any prophet: neither is there among us any that knoweth how long. 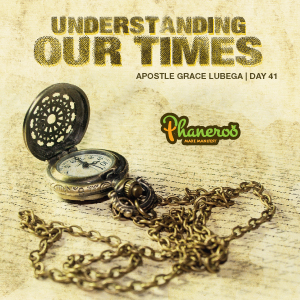 The Psalmist speaks of a situation when people were existing in a world where they could not see their own signs.

Ecclesiastes 3:1 says that to every thing there is a season, and a time to every purpose under the heaven. It means that if God has to purpose on the earth, he will do it through the dispensation of seasons and times.

The place of season is the vibe he sends out in the spirit for you to sense that it is coming. The place of timing is that of your nipping in; getting a hold of it.

Every time there is an understanding of the times, a man will know what to do. There is no way a man will never know the times if he does not know the signs. God is seeking that you may know your sign.

Look at the man at the pool of Bethesda. He dwelt there for thirty eight years. The Bible says that at a certain season, an angel always stirred up the waters. This man's problem was a sign. For thirty eight years, he was around something for which he could not sense a sign for. He thought he needed a man. He did not need a man. He just needed a sign.

Do you know how many people for whom God has stirred up seasons and set times but they know not the signs? Like Psalms 74:9 says, if a sign is not revealed, then at least a man should have a prophet.

However, there is a dispensation when men know not their signs, have no prophets and they know not. That is the situation in Amos 8. The scriptures say in Amos 8:11- 13; Behold, the days come, saith the Lord GOD, that I will send a famine in the land, not a famine of bread, nor a thirst for water, but of hearing the words of the LORD:  And they shall wander from sea to sea, and from the north even to the east, they shall run to and fro to seek the word of the LORD, and shall not find it.  In that day shall the fair virgins and young men faint for thirst.

Contrast this with the situation in Isaiah. Isaiah 30: 20-21 says; And though the Lord give you the bread of adversity, and the water of affliction, yet shall not thy teachers be removed into a corner any more, but thine eyes shall see thy teachers: And thine ears shall hear a word behind thee, saying, This is the way, walk ye in it, when ye turn to the right hand, and when ye turn to the left.

What is in Isaiah is different from what is in Amos. In Amos, God himself causes a famine but the young virgins faint. It means that in this dispensation, men will search out and not find. These are people looking for the word every where but they cannot find it. There will exist a kind of preachers, teachers or ministry but not the kind that they need. This is why men walk out of churches; it is because we do not speak Christ to them; we speak politics.

These men in the word wondered from sea to sea. This is from the Mediterranean sea to the dead sea.When you read about the east and west in the scriptures you realise that east and west is the movement of the sun. The sun rises in the east and.sets in the west. When the bible says that the entrance of thy word brings light  the place of the sun is the figurative definition of the word of God entering and it going out. When.they moved sea to sea, dead sea to Mediterranean, east to west, they first went where the word was going out. They realised that they did not have an answer so they moved north and after word went where the word was entering in but still found no answer.  They began from the south where the dead sea is and where Jerusalem(church) is. So they left church,went to the Mediterranean where the word goes out found there was no answer and went to the north and after going to the north they went to the east.  All they are looking for is the connection between how the word enters and how it should go out. How should the word come into my spirit and how should it come out. I see men from whom words are coming out but it doesn't look as though the words really entered their spirits. If they did, then faith would be unfeigned. In the dispensation of Timothy, we see men whose faith is feigned. They speak of a God who heals but he does not heal. They can't make him heal. They can't believe him to heal. If you say it's working but it is not then it did not come out of your spirit. It came out of head knowledge;out of notes; You read a nice book.

But now, the reality of the spirit must change our lives in a certain way. Men must look at us and say, 'people walked the surface of the earth but that man or woman had God.'