Who Hath Believed Our Report? 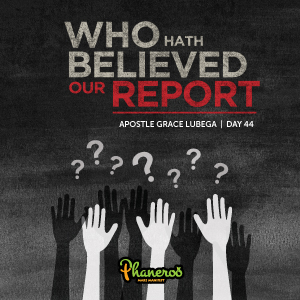 Matthew 9:1~7; And he entered into a ship, and passed over, and came into his own city. And, behold, they brought to him a man sick of the palsy, lying on a bed: and Jesus seeing their faith said unto the sick of the palsy; Son, be of good cheer; thy sins be forgiven thee.And, behold, certain of the scribes said within themselves, This man blasphemeth. And Jesus knowing their thoughts said, Wherefore think ye evil in your hearts? For whether is easier, to say, Thy sins be forgiven thee; or to say, Arise, and walk? But that ye may know that the Son of man hath power on earth to forgive sins, (then saith he to the sick of the palsy,) Arise, take up thy bed, and go unto thine house. And he arose, and departed to his house.

The scriptures are clear. This was Jesus'  hometown. They brought to him one sick with the palsy and he heals him. When he heals him, the Pharisee has a problem. The pharisee's problem is that this is blasphemy. How could he say that he had the power to forgive sins? Jesus asked; 'which is easier? To tell him that his sins be forgiven him or to tell him to rise up and walk?'

I have learnt that nobody can criticise you when they doubt that you can do something. Nobody can attack you if they don't know that you can. No one attacks something without ability.They did not doubt that he was a healer. Their problem was blasphemy. There now goes the paradox.

If you study your life and see the total sum of the things that are fighting you, you will find that it is all proof that God is at work in your life ;look at the way things attack you or fight you. If you had no God, some of those things will have no business in your life.

When the scriptures speak of the sower and the seed, it speaks of that seed who are those against whom trouble and persecution arises on account of the word. This is why trouble and persecution comes. People have convinced the world that everything that happens in a Christian's life is because of generational curses. If Joseph lived in this day and age, considering all that he had been through, he would have been told that he had a spirit of rejection.

But I have told Christians that there is no such thing as a spirit of rejection. The book of proverbs calls it poverty. The bible says that the poor man is rejected. Just get money.When people ignore you, just say, 'father I thank you because I am rich.' Just start to wire money to yourself; the people will come; you will get friends.

Christians are poor becuse they want to be poor. The principles are clear in the bible. The Bible says money answers all things. There is a way to call it. When Paul says that he knows how to be full and how to be abase, he knows how. The Christian must know how.

When Joseph was made governor, do you see how many came to him? There was no need to cast out a spirit of rejection. He just became governor. That is all you need. So if you feel rejected, just get money.  Unfortunately in the Christendom today, everything is attributed to generational curses. They keep breaking but nothing is happening. Some think that we do not do deliverance. We do, but only with ignorant people. But when you know the truth, you don't need deliverance. It is the responsibility of truth to set you free.

Christians are dying every day because all they are being taught are demons. The Bible says that I would rather have you wise unto that which is good and simple concerning evil. Instead of telling you about the millions of demons on your grandfather, let me tell you about the good God.Let me tell you about the creator of heaven and earth, the alpha and omega. Why? The bible says that when you do this, the God of peace shall bruise Satan under your feet shortly. He will not allow it to take a week, a month or a year.

Someone can claim that they have suffered with an infirmity for twenty years. Twenty? Those that observe lying vanities shall forsake their own.mercies. Anything that is not godly is lying.

Why is it that when you got born again things became worse? You seemed better off before. Before you got born again, things were okay but after you gave your life to Christ, things seemed to worsen. You find a Christian who has been in this walk for almost fifty years and she looks beaten. Why? Because everytime, they are breaking generational curses. I would rather have you wise unto that which is good. The principle is that the moment wisdom comes into a man's spirit, the devil is crashed.

The Bible says that whosoever the son sets free is free indeed. If you still see funny things in your life, the son did not set you free. Something else did.

The psalmist says that God performs all things for me. You need to start looking at your life as one where God is performing things for you and not demons. God will hide you as you watch the movie of demons and your enemies falling around you. Blessed be the Lord which performeth all things for me.

Any tongue that rises against you in judgment is condemned. It does not matter whether you are wrong because he is performing all things for you. Whether you are fake or not, he is on your side. The days of trampling on us are over.We know who we are. Do not play with somebody whom God died for. They don't rob us; they dont bewitch us; they don't fire us.

So, I had a problem with believers who do not believe in the work of the spirit and unbelievers who are trying hard to cover up what they believe. There are Christians
who do not believe that it is working while there are unbelievers who believe that it is working and are trying to fight it. Look at any man who fought the Christ. He asked them,'for what work do you persecute me?' The scriptures say that they hated him without cause. Why? They knew it was working.

The unbeliever believes more in God than some Christians do. Remember when Jesus had just resurrected? The chief priests and Pharisees believed so much in the resurrection of Jesus that they could pay for the story to change while some Christians still wonder if he really died. Who believes more?

Let me share a secret with you. One time Jesus found Peter and his friends who had been  fishing the whole night. He told them to cast their nets to the right. They told him that they had been fishing the whole night but had caught nothing.He told them to launch into the deep. They did and caught too much fish. I asked the Holy Ghost why he had done that and he told me that the only way you can get a man off fishing is proving to him that you can measure the amount of fish for any man. For some of us, God needed to prove to us that he could look after us enough for us to leave our jobs and preach the gospel. He needed to prove to us that he was bigger than our jobs.The man tried to fish the whole day and failed to catch fish but at the word of one man he was able to catch more than he could hold. Which Peter can stay on that water when God had proved to him that he could get fish in one day that  would take Peter a month to get?He told him to get into the mouth of a fish and pay taxes. Peter knows a God who can pay taxes out of fish. Peter marvelled and the Lord told him that that was small. He would make him a fisher of men. It meant that he would attract men; to have a certain influence on men. What makes us fishermen is not fishing only; what makes us fishermen is the influence that we have on the lives of men.

When the Lord Jesus dies, Peter goes back fishing. But something funny happened. When the Lord resurrects, they find him on the shore and he asks them,'have you had anything to eat?' He told them to cast their nets on the right and they returned with a multitude of fishes. When Peter realised that it was the Lord, he did not even wait for the boat to reach. He jumped into the water because he knew that Jesus was all he needed. You can try to fish and fail but when you carry Jesus, you will fish plenty.

God has not called you to seek him in vain. Things will happen for you. I understand why Isaiah said who shall believe our report because when you go back to the story in our opening scripture, Jesus is asking, 'which is easier? To say your sins are forgiven thee or get up and walk.' The answer is that it is easy to say than to do certain things.