Home → Phaneroo → Cast The Stone Away

Cast The Stone Away

John 8:4-9(KJV); They say unto him, Master, this woman was taken in adultery, in the very act. Now Moses in the law commanded us, that such should be stoned: but what sayest thou? This they said, tempting him, that they might have to accuse him. But Jesus stooped down, and with his finger wrote on the ground, as though he heard them not. So when they continued asking him, he lifted up himself, and said unto them, He that is without sin among you, let him first cast a stone at her. And again he stooped down, and wrote on the ground. And they which heard it, being convicted by their own conscience, went out one by one, beginning at the eldest, even unto the last. 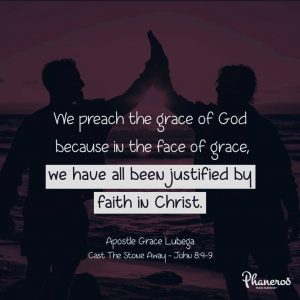 The very law that these men in our theme scripture used to condemn the woman taken in adultery was the very law that judged, weighed and found them wanting in moral authority.

Think about this for a moment.

These were Pharisees, the very epitomes of legalism.

They were the stock of Israel, circumcised on the eighth day, Hebrews of Hebrews, as regarding the righteousness of the law, blameless.

But one Word from the Christ gave them pause; years of legalistic righteousness questioned in this one statement; “He that is without sin among you, let him first cast a stone at her.”

We live in a generation of legalistic men and women who have not appreciated the momentary wisdom of the Pharisees in our theme scripture.

They are quick to cast stones and forget about the qualification the Christ demanded for anyone to cast the first stone.

In the face of the law, all have sinned and fallen short of the glory of God (Romans 3:23).

Cast the stone away.

We preach the grace of God because in the face of grace, we have all been justified by faith in Christ.

We preach the grace of God because in the face of grace, we have all been justified by faith in Christ.

PRAYER: Loving Father, thank you for your great mercy. These mercies are new every morning and each day I awaken in the assurance that I am not condemned. I am forgiven, loved and treasured by the Almighty God. It is this same grace that I extend to those around me because you show it to me every day. In Jesus’ name. Amen.