Acts 2:6-8(KJV) Now when this was noised abroad, the multitude came together, and were confounded, because that every man heard them speak in his own language. And they were all amazed and marvelled, saying one to another, Behold, are not all these which speak Galilaeans? And how hear we every man in our own tongue, wherein we were born? 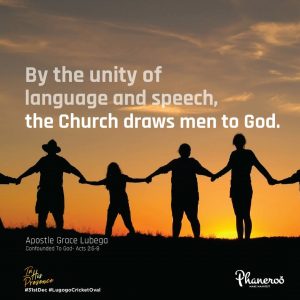 In Genesis 11:1-9, the Bible speaks of an experience when men were of one language and one speech and started to build a tower and make a name for themselves.

They were a people who did not acknowledge God in their increase and multiplication.

Because of this, the Bible reveals that God confounded their language and scattered them allover the earth.

The New Testament explains a similar experience in Acts 2. When the disciples were filled with the Holy Ghost, they spoke with different tounges, and the people who heard them were confounded and amazed. That day, thousands gave their lives to Christ.

That very language that confounded the men without drew them to eternal salvation. By the unity of language and speech, the Church draws men to God. Hallelujah!

GOLDEN NUGGET:
By the unity of language and speech, the Church draws men to God.

PRAYER: Father I thank you for the great mandate we have as the body of Christ. Thank you for the unity of the faith and of language and speech. I understand purpose and the divine need to advance the kingdom of God. The language I speak is understood by all men. By it, multitudes are drawn to the kingdom. In Jesus' name. Amen.