Luke 14:28-30 (KJV); For which of you, intending to build a tower, sitteth not down first, and counteth the cost, whether he have sufficient to finish it? Lest haply, after he hath laid the foundation, and is not able to finish it, all that behold it begin to mock him, Saying, This man began to build, and was not able to finish. 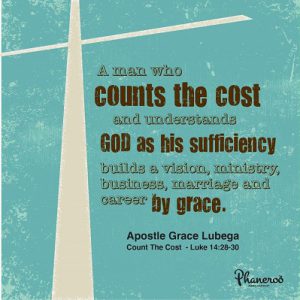 A young man, zealous and excited by the colourful horizon of the future walked out of a ministry he was previously serving in to go start his own. In his wake, he left a trail of heartbreaks and disappointments.

A few years down the road, he was bitter, frustrated and disillusioned. The ministry he had started, his marriage and vision were failing.

He had set up a structure that was a far cry from the Church facility he had envisioned.

The people attending his activities dwindled every service and those closest to him secretly ridiculed him.

That was a man who was not only being mocked by men but by his own work too.

Like many people I have seen in life, he had not counted the cost.

You want to get into marriage, build a ministry, pursue a great career or build a multinational business. Have you counted the cost?

Cost here is not monetary. It is not the budget you draw up for your vision.

Part of counting the cost is understanding the sufficiency–that it is of GOD.

In 2 Corinthians 3:5, the Word says, “Not that we are sufficient of ourselves to think anything as of ourselves; but our sufficiency is of God.”

A man who counts the cost and understands God as his sufficiency builds a vision, ministry, business, marriage and career by GRACE. Hallelujah!

A man who counts the cost and understands GOD as his sufficiency builds a vision, ministry, business, marriage and career by grace.