Colossians 2:20-23(AMPC); If then you have died with Christ to material ways of looking at things and have escaped from the world’s crude and elemental notions and teachings of externalism, why do you live as if you still belong to the world? [Why do you submit to rules and regulations?—such as] Do not handle [this], Do not taste [that], Do not even touch [them]…Such [practices] have indeed the outward appearance [that popularly passes] for wisdom, in promoting self-imposed rigor of devotion and delight in self-humiliation and severity of discipline of the body, but they are of no value in checking the indulgence of the flesh (the lower nature). [Instead, they do not honor God but serve only to indulge the flesh.] 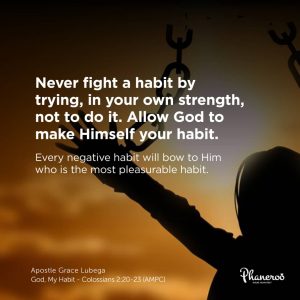 Negative habits and addictions usually plague people in vicious cycles that are characterised by episodes of intermittent progress followed by regression.

Have you ever asked yourself why some habits are like slippery rabbit holes out of which some people attempt to climb only to be plunged right back in after a temporary period of success? Have you wondered why an alcoholic survives withdrawal symptoms, keeps away from the bottle for a time only to find himself one wretched day, drinking himself into oblivion as if his obsession was only mocking him with a reprieve?

The answer is in how people try to fight habits. They erroneously assume that fighting with mere willpower what you crave in the flesh strengthens your resistance against it.

This is what our theme scripture calls self-imposed rigor and the severity of discipline against the body. Such an approach to bad habits places you in similar company with those saying “do not handle, do not taste, do not touch this or that.” Like the Bible has revealed, this has absolutely no value in checking the indulgence of the flesh.

You may avoid what your body wants for a season. That desire will only jump in hot pursuit of you and soon enough, it will drag you right back into the mire of your carnal craving.

When you immerse yourself in these higher pleasures, you can walk away from that bottle or narcotic drug even if it danced before your eyes with all the allure of an enchantress. His higher pleasures are what fortify your resistance in the face of temptation.

Never fight a habit by trying, in your own strength, not to do it. Allow God to make Himself your habit. Every negative habit will bow to Him who is the most pleasurable habit.

GOLDEN NUGGET: Never fight a habit by trying, in your own strength, not to do it. Allow God to make Himself your habit. Every negative habit will bow to Him who is the most pleasurable habit.

PRAYER: Loving Father, thank you for this great and marvelous Word. Your Word says that in your presence is fullness of joy and on your right hand are pleasures forevermore. I embrace Christ my ultimate pleasure. You indulge me with wisdom, I am intoxicated by Your Spirit and high on Your Word. In Jesus’ name, Amen.