Home → Phaneroo → Heroes At The Altars Of Persecution

Heroes At The Altars Of Persecution

2 Timothy 3:12(KJV); Yea, and all that will live godly in Christ Jesus shall suffer persecution. 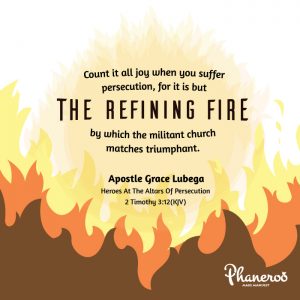 Persecution was one of the defining marks of the early church. The Christians of that time wore it as a badge of honour, the hero’s medallion of victory against a fallen world.

During the age of Catholic Christianity (70 AD-312AD), it fuelled the spread of Christianity. Like Tetullian, a prolific early Christian author wrote, ‘the blood of martyrs is the seed of the Church.”

When we peer through the lens of history, we see a time when persecution against the Church seemed to disappear. This was during the age of imperial Christianity (312 AD to 590AD) after the emperor Constantine became a Christian and by edict made Christianity the empire’s religion.

The lessons from then are dire because the Church of Christ lapsed into a state of compromise from which it has never recovered.

The absence of persecution in the church at the time blinded many against the need for the sacrifice that preserves the integrity of truth; when the Church went to bed with the state and lay on the soft pillows of religious tolerance, it opened a window for the merger of pagan rituals with Christian practice.

Today, there are those who wish for a Christian utopia devoid of persecution. No. That is not the mind of God!

A certain level of persecution must never leave the Church. For if the Church ever finds itself at peace with the world then it must question who its present bedfellow is.

Child of God, count it all joy when you suffer persecution, for it is but the refining fire by which the militant Church matches triumphant. Glory to God!

GOLDEN NUGGET: Count it all joy when you suffer persecution, for it is but the refining fire by which the militant church matches triumphant.

PRAYER: My loving God, I thank you for this Word. I stand in the confident truth that I am yours and count it such a great blessing and honour to suffer persecution for your name’s sake. I embrace it with grace knowing that I carry a crown of glory upon my life. My testimony of endurance brings many to the faith. In Jesus’ name. Amen.