Mark 5:25-29(AMP); And there was a woman who had had a flow of blood for twelve years, And who had endured much suffering under [the hands of] many physicians and had spent all that she had, and was no better but instead grew worse. She had heard the reports concerning Jesus, and she came up behind Him in the throng and touched His garment, For she kept saying, If I only touch His garments, I shall be restored to health. And immediately her flow of blood was dried up at the source, and [suddenly] she felt in her body that she was healed of her [distressing] ailment. 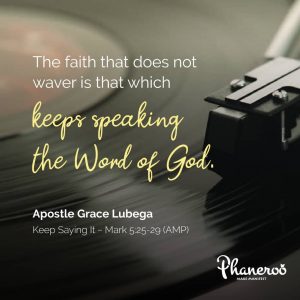 A ruled spirit is one that holds fast onto the confession of faith.

To hold fast means that regardless of how hard-hitting the circumstance, what you say is in line with the Word of God.

This was how the woman with the issue of blood positioned herself for healing.

Our theme scripture reveals that ‘SHE KEPT SAYING.’

The walk of faith is not one where you speak once and sit back. It is one where you keep speaking until you see the manifestation of what you desire!

It doesn’t matter how much the situation worsens, KEEP SPEAKING!

It doesn’t matter how much hotter the fire gets, KEEP SAYING IT.

The faith that does not waver is that which keeps speaking the Word of God.

The faith that does not waver is that which keeps speaking the Word of God.