Hebrews 9:8-10(KJV); The Holy Ghost this signifying, that the way into the holiest of all was not yet made manifest, while as the first tabernacle was yet standing: Which was a figure for the time then present, in which were offered both gifts and sacrifices, that could not make him that did the service perfect, as pertaining to the conscience; Which stood only in meats and drinks, and divers washings, and carnal ordinances, imposed on them until the time of reformation. 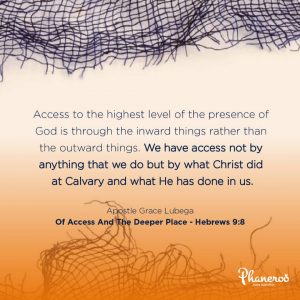 In the Old Testament dispensation, men sought access to God through gifts and sacrifices. They sought Him through meats, drinks, diverse washing and carnal ordinances. The Bible says that these did not make he that did the service perfect.

Regardless of all that they did, the sacrifices that were made and the gifts that were offered, the way into the holiest of holies was not made manifest.

Think about it for a moment.

Year after year, they sacrificed to God. For example, in 2 Chronicles 7:5, Solomon sacrificed twenty-two thousand head of cattle and a hundred and twenty thousand sheep and goats.

No amount of external and outward performance could reveal the way into the deepest places in God.

In all this, God sought to communicate to the Church that access to the highest level of His presence is through the inward things rather than the outward things.

For as long as men depended on what they could do for God through their own power, they would never access the highest level of His presence.

It took one sacrifice for God to tear the veil and give us this access. Now, we have access not by anything that we do but by what Christ did at Calvary and what He has done in us.

His name be praised!

GOLDEN NUGGET:
Access to the highest level of the presence of God is through the inward things rather than the outward things. We have access not by anything that we do but by what Christ did at Calvary and what He has done in us.

PRAYER: Loving Father, I thank you for this Word. The veil was torn and I have access into the holiest place; to the deepest level of your presence. My heart is yielded to your Spirit as you launch me deeper in you.
In Jesus’ name, Amen.