Of Wider Nets And Bigger Ships

Luke 5:4-7(KJV); Now when he had left speaking, he said unto Simon, Launch out into the deep, and let down your nets for a draught. And Simon answering said unto him, Master, we have toiled all the night, and have taken nothing: nevertheless at thy word I will let down the net. And when they had this done, they inclosed a great multitude of fishes: and their net brake. And they beckoned unto their partners, which were in the other ship, that they should come and help them. And they came, and filled both the ships, so that they began to sink. 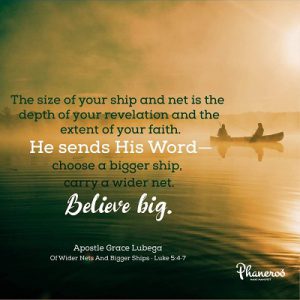 The Word that the Lord may send to an individual is sometimes bigger than the capacity of that man’s “net” or “ship” ( his ability to contain it).

In Peter’s case, Jesus’ instruction was greater and weightier than Peter’s net and ship and as such, the scriptures record that it broke and the ship began to sink.

This is why preparation in and for ministry is twofold.

All Jesus said was, “Launch into the deep.” It is Peter who determined the size of his net and his ship.

The size of your ship and net is the depth of your revelation and the extent of your faith.

If God says, “you are the head and not the tail,” (Deuteronomy 28:13), one person will think of excelling in class, another launches deeper and sees himself as the president of a nation while another goes past the boundaries of a nation and sees the world.

How about our father Abraham? The Lord told him, “Lift up your eyes, for as far as your eyes can see, I have given unto you.” (Genesis 13:15 NLT). When the Word came, Abraham launched deep enough to see not just Canaan but the whole world. As such, he became the father of all nations.

Someone else may receive the same word and only think of inheriting a few acres of land while another will see the earth.

So the choice is up to you. He sends His Word—choose a bigger ship, carry a wider net. Believe big. Hallelujah!

The size of your ship and net is the depth of your revelation and the extent of your faith. He sends His Word—choose a bigger ship, carry a wider net. Believe big.

PRAYER: Father, I thank you for this wisdom and knowledge. Thank you for the possibilities you have set before me and for the greatness of your Word in my spirit. Lord I believe that with you, nothing is impossible. For as far as my eyes can see have you given unto me. My vision is enlarged, my faith is increased, my possibilities are limitless and my aspirations are great. I choose to believe you greatly because you are a great God, to dream big and follow the path of greatness because it is the course you daily point me to. In Jesus’ name. Amen.