Hebrews 11:8-9(AMP); [Urged on] by faith Abraham, when he was called, obeyed and went forth to a place which he was destined to receive as an inheritance; and he went, although he did not know or trouble his mind about where he was to go. [Prompted] by faith he dwelt as a temporary resident in the land which was designated in the promise [of God, though he was like a stranger] in a strange country, living in tents with Isaac and Jacob, fellow heirs with him of the same promise. 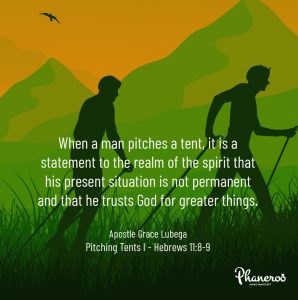 Tents in the scriptures represent the testimony of faith for men that see greater visions in and by God.

When a man pitches a tent, it is a statement to the realm of the spirit that his present situation is not permanent and that he trusts God for greater things.

This was the story of Abraham and the patriarchs. The Bible says that they lived in tents as temporary residents in the land designated for the promise.

Abraham was wealthy in his own right and could have put up a more permanent structure. However, through the life of Abraham, God wanted to set a pattern for the church.

The instruction in this pattern is that men of faith pitch tents when they receive the Word of God.

When such a man pitches a tent, he in essence is saying that he knows that God is not done with him and that he sees a much brighter future.

“Arrivalism” is a burden of men that can’t dream the God dream.

It doesn’t matter how much success you achieve. You must have the wisdom of a man who pitches tents; who constantly tells God that he expects and is hungry for more.

God wants to do exceedingly abundantly above what you will ever expect. Learn to pitch tents!

When a man pitches a tent, it is a statement to the realm of the spirit that his present situation is not permanent and that he trusts God for greater things.

PRAYER: Father, I thank you for this wisdom. Thank you for the great things that you have in store for me. I know that you are not done with me; that the future has precious and unimaginable things. I choose to pitch tents in the knowledge that greatness awaits me. In Jesus’ name, Amen.