Home → Phaneroo → The Boldness Of The Shepherd

The Boldness Of The Shepherd

1 Samuel 17:34-35(AMP); And David said to Saul, Your servant kept his father’s sheep. And when there came a lion or again a bear and took a lamb out of the flock, I went out after it and smote it and delivered the lamb out of its mouth; and when it arose against me, I caught it by its beard and smote it and killed it. 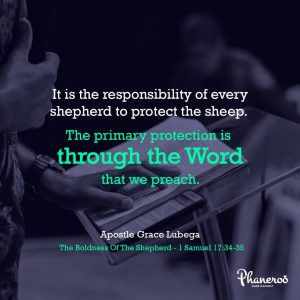 It is the responsibility of every shepherd to protect the sheep. This is wisdom for ministers of the gospel.

It requires boldness, courage and bravery.

David sets a perfect example in our theme scripture. When a lion or bear took a lamb out of the flock, he went after it, took the lamb out of its mouth, grabbed the lion or bear by the beard, smote it and killed it.

How is that translated in the life of the minister? How do you protect the flock?

The primary protection is through the Word that we preach.

Boldness means that we stand for certain truths even when the world cannot stomach them.

Boldness means that we teach sound doctrine even when men want to stone us for it.

The boldness of the shepherd casts aside political correctness and preaches Christ Jesus, dead and resurrected.

It is the responsibility of every shepherd to protect the sheep. The primary protection is through the Word that we preach.

PRAYER: Father, I thank you for your Word; it protects; guards and preserves. Your Knowledge consumes every part of my being and defines my responses to every area of my life. I defend the truth of the gospel at all times because I am bold in spirit. I never give in to liberal ideals that dilute the truth because what you say is absolute. In Jesus’ name, Amen.