Home → Phaneroo → The Error Of The Prophet

The Error Of The Prophet

Revelation 2:14 (KJV): But I have a few things against thee, because thou hast there them that hold the doctrine of Balaam, who taught Balac to cast a stumblingblock before the children of Israel, to eat things sacrificed unto idols, and to commit fornication. 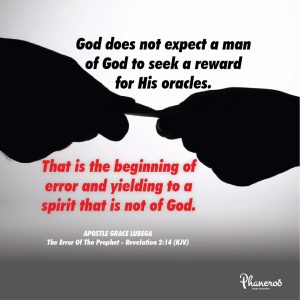 In the Old Testament, Balaam was merely a PROPHET who was requested by Balac to curse the children of Israel (Numbers 22).

In the book of Jude, the scriptures speak of the ERROR of Balaam thus, “Woe unto them! for they have gone in the way of Cain, and ran greedily after the error of Balaam for reward, and perished in the gainsaying of Core.”(Jude 1:11).

In the book of Revelation, the spirit of Balaam shifts from the prophetic to (coming in a form of) DOCTRINE.

When we trace this transition through the scriptures, we understand that Balaam was a PROPHET who ERRORED in DOCTRINE.

The error was at the point when he allowed himself to be enticed and influenced by monetary reward.

God does not expect a man of God to seek a reward for His oracles. That is the beginning of error and yielding to a spirit that is not of God.

GOLDEN NUGGET:
God does not expect a man of God to seek a reward for His oracles. That is the beginning of error and yielding to a spirit that is not of God.

PRAYER: Father, I thank you for this wisdom. There is so much in this life of the Spirit of which we ought to be cautious, but I am grateful that the abundance of your Word has taught me to draw the line. It has also given me the wisdom to know the difference and the discernment to separate the true from the false light. I cannot be deceived. Even as I explore this world, I see and hear truth with clarity as perfectly revealed by you. To the glory of your name. Amen.