Home → Phaneroo → The Heart Beat Of The Christian

The Heart Beat Of The Christian

Acts 17:16-17(KJV); Now while Paul waited for them at Athens, his spirit was stirred in him, when he saw the city wholly given to idolatry. Therefore disputed he in the synagogue with the Jews, and with the devout persons, and in the market daily with them that met with him. 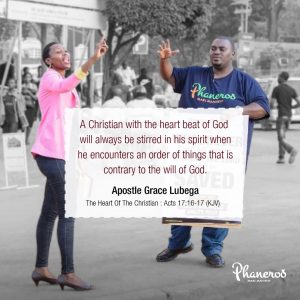 Christians are the moral conscience of their societies.

It is a Christian with a seared conscience who will look at moral debauchery in his society and feel nothing.

It is a Christian with a seared conscience who will ignore social injustice.

Take an example from history. In the era in which William Wilberforce lived, slavery was as acceptable as birth and marriage. It was so woven in the fabric of human history that uprooting it had to take the very hand of God.

For his almost twenty year struggle, he came to be known as the “moral conscience of the nation.”

He and his battle companions like Granville Sharp, Hannah Moore under the spiritual guidance of John Wesley were Christians with Methodist leanings.

This in itself rendered the abolitionist movement Christian in character.

The early Christian church stood against inhuman practices such as infanticide.

A Christian with the heartbeat of God will always be stirred in his spirit when he encounters an order of things that is contrary to the will of God. Such was Paul in our theme scripture.

What did Paul do? The Bible says that he went about preaching in the synagogues and in the market. He did something about what he saw!

So what are we as the church doing?

Are we taking the front line against poverty?

Are we taking the front line against child trafficking?

Are we taking the frontline against child prostitution?

God has called us to be forces of social and cultural change and every day, we ought to rise to the occasion.

A Christian with the heartbeat of God will always be stirred in his spirit when he encounters an order of things that is contrary to the will of God.

PRAYER: Father, I thank you for the responsibility upon my life. I thank you because it is a responsibility coupled with divine authority. You have equipped me as an architect of change; the world is a much better place because I am in it; my children will live in a better world because I am making change. To the glory of God. Amen.