Home → Phaneroo → The Identity Of The Church

The Identity Of The Church

1 Samuel 17: 57-58(KJV); And as David returned from the slaughter of the Philistine, Abner took him, and brought him before Saul with the head of the Philistine in his hand. And Saul said to him, Whose son art thou, thou young man? And David answered, I am the son of thy servant Jesse the Bethlehemite. 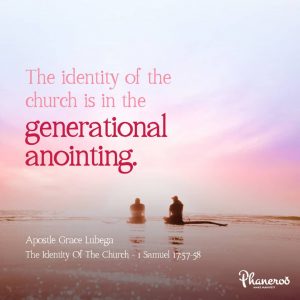 The identity of the Church of Christ is not in the gifts of men and women of God; the numbers of people flocking to churches or the size of our cathedrals.

The identity of the Church is in the generational anointing.

Where have we come from? From what waters did we drink? Under whose garments were we anointed? Which hands were laid on us?

This pattern can only be seen too well from our theme scripture.

When David attains victory over the Philistine, the question he is asked is, ‘whose son art thou?’

The Church of Christ has an etymology. You can never understand this etymology until you appreciate the importance of the generational anointing.

It is this generational anointing that begat generals in the faith. The great revivalists, healers, and demonstrators of power of old.

These were men who understood the identity of the anointing, had the authority and power to command men’s destinies, to direct their lives and stir in them more than just an excitement over blessings but to create crazily anointed people from out of their own ministries.

This is not the case today.

Today, many ministers of the gospel are ‘encouragers’ of their congregation. Such men cannot raise mantles even in their own households. There is no fire on our altars from which the hearts of men can be set ablaze.

Encouragement cannot prevail in the sands of time. Only the anointing in its undiluted glory surpasses ages to continue ministering to generations in the ages to come.

Whose son are you, child of God? Which hands were laid on you? What is the root of your identity?

GOLDEN NUGGET:
The identity of the church is in the generational anointing.

PRAYER: Father, I thank you for this Word. The Bible says that you are the Father of all by whom the entire family on earth and in heaven is named. I submit my life to the pattern of fatherhood and give honour to the spiritual authorities you have placed in my life. I know from which waters I drank and from whose garments I am anointed, I give honour where it is due, to the glory of your name, Amen.