2 Samuel 15:2-6(KJV); And Absalom rose up early, and stood beside the way of the gate: and it was so, that when any man that had a controversy came to the king for judgment, then Absalom called unto him, and said, Of what city art thou? And he said, Thy servant is of one of the tribes of Israel. And Absalom said unto him, See, thy matters are good and right; but there is no man deputed of the king to hear thee. Absalom said moreover, Oh that I were made judge in the land, that every man which hath any suit or cause might come unto me, and I would do him justice! And it was so, that when any man came nigh to him to do him obeisance, he put forth his hand, and took him, and kissed him. And on this manner did Absalom to all Israel that came to the king for judgment: so Absalom stole the hearts of the men of Israel. 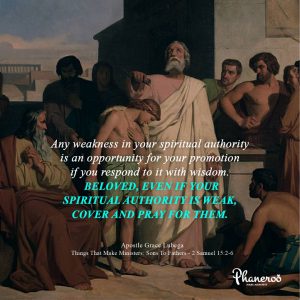 Any weakness in your spiritual authority is an opportunity for your promotion if you respond to it with wisdom.

That is why you must COVER it.

Sadly, we live in a generation where if one’s spiritual authority is weak in any area, there are sons that will seek to expose that weakness.

This is very much like the flaw in Absalom’s character that is demonstrated by our theme scripture.

He stole the hearts of the people of Israel by giving the impression that his father was incapable of giving them proper judgment over the issues that affected their individual lives.

He exposed his father’s weakness in order to gain favour before men.

This is in sharp contrast with David. Saul had several weaknesses. He was a man tormented by an evil spirit, but there is no point in the scriptures where we see David broadcasting this fact in order to disqualify Saul from the office of kingship. In fact, he played the harp to soothe him(1 Samuel 17).

Beloved, even if your spiritual authority is weak, cover and pray for them. If other people do not understand your head, your responsibility is to shield him from their scorn and ridicule.

That is the essence of sons to fathers; they POSSESS the gates of the enemies (Genesis 22:17), they DO NOT OPEN their gates to the enemy. Hallelujah!

PRAYER: My father, I thank you for this wisdom; for teaching me the things that make ministers and for building in me the character of the Spirit by which men grow. I walk in this understanding to give honour where honour is due and custom where custom is due. Where there is weakness, you teach me how to cover it because your love has taught me never to seek to expose a man but to pray for him. By this pattern, I build ministry and by this pattern I serve. In Jesus’ name. Amen.