Genesis 13:8-11(KJV); Gen 13:8-11 And Abram said unto Lot, Let there be no strife, I pray thee, between me and thee, and between my herdmen and thy herdmen; for we be brethren. Is not the whole land before thee? separate thyself, I pray thee, from me: if thou wilt take the left hand, then I will go to the right; or if thou depart to the right hand, then I will go to the left…Then Lot chose him all the plain of Jordan; and Lot journeyed east: and they separated themselves the one from the other. 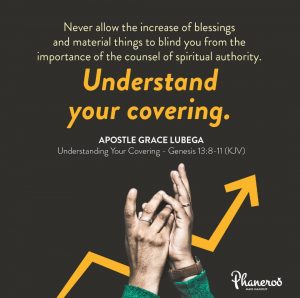 Abraham was a man called by God. It was to Him that the Almighty God said, “Get thee out of thy country, from thy kindred and from thy father’s house, unto a land that I will shew thee.” (Genesis 12:1).

Lot understood this. When Abraham left the land he had called home for years, Lot tagged along (Genesis 13:1).

Lot was surely basking under the graces of multiplication that come with true submission to a spiritual covering.

The increased wealth posed a dilemma. Strife developed between their servants and with it came the ultimate test as to whether Lot understood the covering under which he had so greatly increased.

Lot lifted up his eyes and saw that the Jordan valley was well watered everywhere and he chose this for himself (Genesis 13:10-11).

If Lot had truly understood the covering under which he had left his homeland, he would have asked that same covering for counsel on which direction to go.

But no, he was deluded by the fact that he too had got herds and flocks; he too had prospered and multiplied.

And so, his ending was rather sad.

He pitched camp towards the corruption of Sodom and Gomorrah; one day, visitors to his home were almost assaulted by the evil men of the city in which he dwelt, he attempted to sacrifice his daughters at the altar of moral debauchery; he lost his home and his wife and then his daughters turned him into an instrument of perversion; His life ended in the secluded mountains of Zoar.

Lot’s story carries deep lessons for us, child of God.

Never allow the increase of blessings and material things to blind you from the importance of the counsel of spiritual authority.

GOLDEN NUGGET:
Never allow the increase of blessings and material things to blind you from the importance of the counsel of spiritual authority. Understand your covering

PRAYER: Heavenly Father, I thank you for this great and immeasurable wisdom. I understand the importance of spiritual counsel. I am not blinded by the increase and multiplication around me. I am submitted to this wisdom and in this understanding, I know that I shall finish well. To the glory of your name. Amen.