Ecclesiastes 1:9 (AMP); The thing that has been–it is what will be again, and that which has been done is that which will be done again; and there is nothing new under the sun. 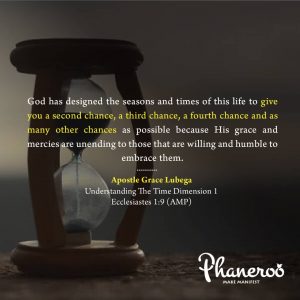 The time dimension is circular.

History repeats itself. What has been shall be again and what has been done shall be done again because of this circular motion of events and experiences under the sun.

This same sequence is demonstrated through the prophetic ministry of Samuel.

The Bible says In 1 Samuel 7:16, “And he went from year to year in circuit to Bethel, and Gilgal, and Mizpeh, and judged Israel in all those places.”

Christ had a similar experience in His earthly ministry. In Mark 6:6, the Bible reveals that He went ’round about’ the villages teaching.

Events under the earth are the same, although the degrees may change from time to time.

As a believer, you ought to understand this sequence and rotation because when you do, you will be able to fix any issue in your life.

What assurance does this truth bring to you as a child of God?

It means that if you failed to fix something this year, do not despair for God has designed another opportunity for you to fix it. If it failed yesterday, another moment is available in time for you to do better.

I know people who give up the first time something fails; they believe that once an opportunity has passed, then they will never have it again. In the world, it is said that opportunity knocks once at every man’s door. That is not scriptural.

God has designed the seasons and times of this life to give you a second chance, a third chance, a fourth chance and as many other chances as possible because His grace and mercies are unending to those that are willing and humble to embrace them.

God has designed the seasons and times of this life to give you a second chance, a third chance, a fourth chance and as many other chances as possible because His grace and mercies are unending to those that are willing and humble to embrace them.

PRAYER: Loving Father, I thank you for this great truth. You are not just the God of second chances, you are the God whose arms are wide open; whose love knows no bounds and whose grace is limitless. I embrace life in this understanding; to believe again; to trust again; to work harder at past projects; to pick up from where I stopped, knowing that you are available to see me through to the end. In Jesus’ name, Amen.