Home → Phaneroo → Wisdom In Warfare: The Battle Field Of The Mind

Wisdom In Warfare: The Battle Field Of The Mind

2 Corinthians 10:4-5; For the weapons of our warfare [are] not carnal, but mighty through God to the pulling down of strong holds; Casting down imaginations, and every high thing that exalteth itself against the knowledge of God, and bringing into captivity every thought to the obedience of Christ. 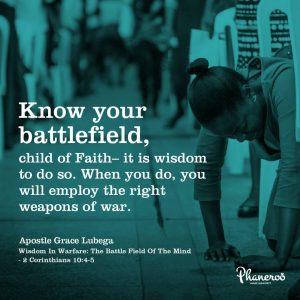 It is one thing to know the weapons of our warfare. It is another to know how to war.

The weapons may be available but the wisdom to war might be absent.

The scriptures are insistent on the wisdom of warfare. They remind us that wisdom is better than weapons of war (Ecclesiastes 9:18). They also tell us that it is God who teaches us to war (Psalms 144:1).

This means that God is very interested in instructing us in the patterns of warfare.

Our theme scripture teaches us another wisdom in warfare which is to understand that the mind is the battlefield.

Strongholds are in the mind.

The Apostle Paul paints this pattern of truth through our theme scripture. He speaks of “casting down IMAGINATIONS”, “everything thing that exalts itself against THE KNOWLEDGE OF GOD,” “bringing into captivity EVERY THOUGHT.”

Imaginations, knowledge and thoughts have their seat in the mind.

Know your battlefield, child of Faith–it is wisdom to do so. When you do, you will employ the right weapons of war.

Know your battlefield, child of Faith–it is wisdom to do so. When you do, you will employ the right weapons of war.

PRAYER: Heavenly Father I thank for the gift of your Word. I thank you because the weapons of my warfare are not carnal but they are mighty in you Lord. You are the God who teaches me to war and this day, I walk in the understanding of my battlefield. My thoughts are pure, my mind is sound. With wisdom, I have overcome and walk in victory every day to the glory of your name. Amen.